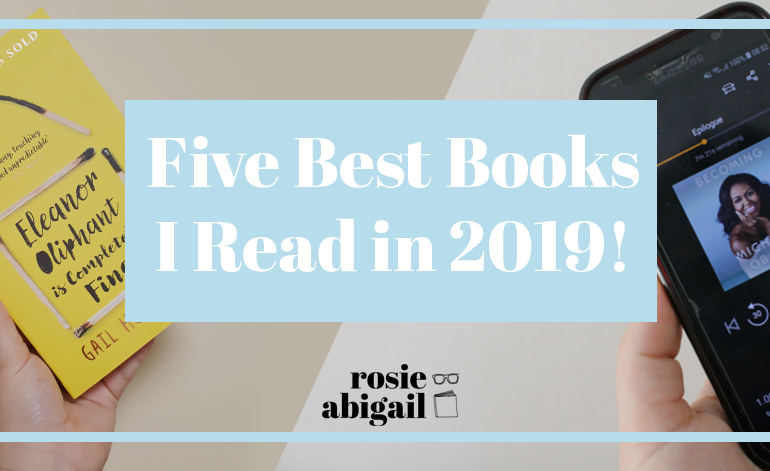 The same thing that happens every year happened again. ‘And what’s that?’ I hear you ask. I didn’t hit my reading goal (sigh, booo me). In all honesty, I don’t actually mind not hitting it, because setting a target was enough to get me reading more than I did in 2018! I also think starting a Masters in English Literature helped, but we’ll look past that…

My 2019 year in books went something like this; I tried and failed again to get into Austen, spent hours listening to Audible, and put a lot of money into books I needed (and could have realistically got from the library) for my degree. I only read one book in 2019 that was actually published in 2019; the rest were a mix of classics, modern, and contemporary literature that I had missed the boat on. With that in mind, here are my favourite reads from 2019 (that aren’t all from 2019)!

Oh boy, I was late on the hype train for this one. I had seen this book recommended in magazines, on social media, by every book lover friend I have, and yet I still kept saying ‘yeah yeah, I’ll read it one day’. I bit the bullet and bought the book after seeing my Master’s class start raving about it, and I had to plug my ears to avoid spoilers. Eleanor Oliphant was the first book in a about a year that I struggled to put down. Wherever I went, Eleanor came with me; on my bedside table, in my bag, even to work! Thank Heavens that I did a lot of traveling in November, because I devoured this in less than a week. Eleanor Oliphant is Completely Fine is hard to put in a genre box, and that’s part of the appeal of the novel for me, but I would say it has aspects of romance, a coming of age story, mystery, and psychological fiction. I can see why reviews had such a hard time explaining why they loved this book so much, as this book is best enjoyed when you go in blind and have no preconception of the story or characters. All I will add is that I loved Honeyman’s depiction of depression and other mental illnesses in the novel; it felt real and visceral and lived. Please, read this book.

This book has been on my ‘to read list’ since I was fourteen years old, and it’s only taken me ten years to read to bloody read it. From my time in GCSE English, to A-Level English Literature, to my actual degree, Brave New World has been constantly chucked around as an example of a ‘seminal text’ and ‘highly relevant’. So, I chose to completely ignore it and focus on reading the Harry Potter series for the thirteenth-thousandth time (what an absolute Rosie move). I only picked up Brave New World from my bookshelf as I was in that weird limbo period between New Year’s and returning to work, and needed to kill some time. I plonked my butt on the sofa, curled up in some blankets, and finished Brave New World by the end of the day. This book hit hard. One minute, you are merrily reading along, and the next, you are hit with the hardest of world truths. Despite the fact that the novel is a dystopian piece of modernist fiction, it really does hold up a mirror to society (a little bit too eerily so for a book written 90 years ago, but I would attribute that to world leaders not learning from past mistakes, and not the idea that Huxley was a time traveller). I would thoroughly recommend this book to those who enjoy dystopian fiction a la Orwell, modernist literature, and to anyone who wants to see how influential literature truly can be.

A first-hand experience piece of feminist literature all about mental health? Count me in! Like Brave New World, this novel had been on my mental ‘to read list’ for a while. I first found this novel when researching for a presentation on my favourite novel, Sylvia Plath’s The Bell Jar (one pound in the Rosie Mention’s ‘The Bell Jar’ Jar) as Girl, Interrupted is commonly referred to as the descendant of Plath’s novel. Although I do see that, mainly as both books were written as semi-autobiographical accounts of being a mentally ill woman in the mid-twentieth century, Girl, Interrupted is an excellent novel in it’s own right. Based around Kaysen’s own time as an inpatient at a psychiatric hospital, we follow her diagnosis of BPD, the stories of the people she meets, and her life alongside being a patient. The story is told via a non-linear narrative, which I found as a really interesting way to tell Kaysen’s story. I’m so glad that I finally picked this up; not only is it a well written book, it’s doing the important work of helping to de-stigmatise mental illness.

The last of the physical books, as I have an audiobook coming up, is this memoir by Carrie Fisher. The Princess Diarist is a book so real and well written that you can practically hear Carrie speaking the words herself; it seeps with her fiery attitude and honesty. Like most people, I learnt about the awe-inspiring woman that is Carrie Fisher through Star Wars, a film series of which I am (unashamedly) a huge fan. So, when my holiday to Disney World Florida coincided with Galaxy’s Edge (a Star Wars themed lane) being opened, I knew it was time to pick up this book. The first half of the book centres on her time filming the first film A New Hope, being an actress on her first big film, and her affair with Harrison Ford. The second half comprises of previously unseen diary entries and poems written by Fisher during this time period. Overall, The Princess Diarist has a perfect balance of gritty realism, loud humour, and a rare & delicate human honesty. This book felt like talking to a friend, if your friend was the hilarious, rude, and wonderful Carrie Fisher.

Finally, my favourite audiobook! I’m a huge Audible fan, and I tend to listen to books when I’m cooking or working out. I’m going straight in and will say it right away; Becoming is the best traditional autobiography I have ever read. Written by Michelle Obama (no ghost writers here!), this book is a gem. It covers every aspect of Michelle’s life, from growing up in Chicago and her relationship with her family, to being a young glass-ceiling breaking lawyer who becomes the style icon and game changer that she is now. I felt like I was going along a journey with Michelle, a feeling I rarely get with autobiographies. The book itself is read by Michelle, and she speaks with such warmth and class; it’s like she’s there in the room with you. I think if everyone tried to be just a little bit more like Michelle Obama, the world would be a better place.

Obviously, being me, I have a lot of books on my ‘to read’ list for 2020, including Margaret Atwood’s The Testaments, and I want to read some more of Patti Smith’s memoirs because I adore her book Just Kids. I also have the reading goal of ‘leaving my pretentious-ass judgement at the door’. By not taking a gamble and only reading books that have been ‘proved’ as good has really stopped me from reading some excellent novels. So, I’m leaving that behind and headed in 2020 with an open mind for literature!

This site uses Akismet to reduce spam. Learn how your comment data is processed.